UK house price growth has remained broadly stable in March at 2.1 per cent with little changed from the 2.2 per cent recorded from the previous month.

Robert Gardner, Nationwide Chief Economist, said:”historically low unemployment and mortgage interest rates together with the lack of properties on the market is likely to provide some support for house prices. Overall, we expect house prices to be broadly flat, with a marginal gain of around 1% over the course of 2018.”

For the fourth quarter in a row, regions in the North of England have recorded a stronger annual house price growth than those in the South. According to Nationwide, over the past two years the Southern English regions have seen a steady deceleration in price growth, which is now running at its slowest pace since 2012.

The Northern regions, however, have recorded a gradual acceleration and recorded their strongest growth rate since 2014 in the first three months of this year. 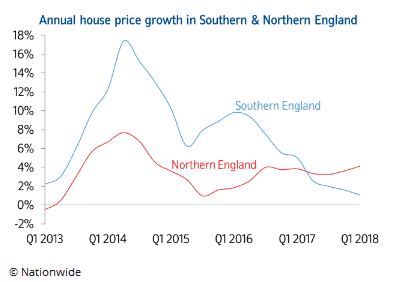 Over the past decade, home ownership has declined across all English regions with London having the biggest reduction with home ownership rate falling from 57 per cent to 47 per cent.